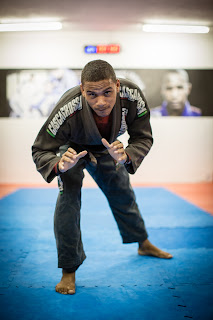 An interview by Andrew 'Moz' Morris and translated by Nico Ball

The evening of Monday the 27th of July and there were forty people squeezed onto the mats of the FT Academy. A special feeling was in the air as Mestre Terere began his pre-training 'formation' with the class. He began to talk about the dedication and hard-work of a student who had given everything not just to Jiu-Jitsu but to the social project that serves the children and teens of the community here. Then he called up an unsuspecting Fabricio da Silva to the front of the class. 'Birrinho' as he is affectionately known to the community, is a cousin of Terere as well as being the professor of the social project. He stood proudly before the class, to have his brown belt stripped from his waist and have it replaced with black belt before being given a (friendly) Uchi-Mata by his longtime mentor. Fabricio who is never usually lost for words was understandably overcome with emotion but managed to deliver a heartfelt speech thanking everyone and explaining what this moment meant to him.

What age did you start training Jiu-Jitsu?
15 years old.

Have you always train with Terere?
We rarely trained with him but it was his social project. The professor was Leandro Martins.

Did you feel pressure to succeed seeing that you were associated with Terere?
I’ve always felt the pressure. Two kinds actually. One for being his student and another because I’m his cousin. So it was two kinds in one.

How was it growing up in Cantagalo in the 80s and 90s?
It was really cool. It was always good living here.

There weren’t a lot of problems with violence?
There was but we didn’t focus on that, we always focused on Jiu Jitsu. It was a place where we could come and stay. We trained and had fun thanks to Terere.

Did you see a lot of your friends go into trafficking. Was it hard to stay away from that life?
No it was very hard. I lost a lot of friends to the life. Some of them died, some of them are in jail. It was always difficult, you had to deal with a lot of pressure. For me, I never wanted to get into that life. I always had a lot of examples that didn’t force me to enter into it. I always distanced myself from that life through Jiu-Jitsu. So it was never a worry that I had.

After 'pacification' in the favela did things change a lot?
In a way it changed a lot.

In a good way?
It’s a little better, but at the same time they don’t let us do anything here. They don’t let us have any fun. They try to stop all of the parties. None of that life.

Was that Buda? I hear a lot about him from different people can you tell me a little about him?
He trained here with us. He was very good. He fought with Leandro Lo. And he always trained here. It was gratifying seeing his Jiu-Jitsu. He was always really good, one of the best guys at the academy.

He trained with Michael Langhi too?
He did. When Fernando came from Sao Paulo to the project he came with Langhi and Lucas Lepri. Everyone came, Cobrinha, everyone came here. It used to be TT here. Everyone came here. We trained and Buda always stood out from everyone else. He was really good. It was so hard to pass his guard. Now he isn’t here with us anymore, he’s in jail, and that kind of dampened our spirits. He was always so dedicated and said he wouldn’t get into crime. It was something that was so…. So… so unexpected.

A lot of people still talk about him. Will he be in jail for the rest of his life?
No, no. soon he will be back with us, but I’m not sure if he’ll want to get back into Jiu-Jitsu.

How long has he been in Jail now?
3 years.

When Terere stopped training due to is personal issues you also stopped right?
I kind of stopped but not completely. I trained with Leandro Martins, he would take me to his academy in Sao Paulo and there I would stay 3 months and then come back. I would go to Checkmat here in the favela. I never stopped completely. Not ever for more than a year.

What would you say that Terere means for the community of Cantagalo?
He is a example to everyone from my time and now for the next generation as well. He’s a symbol for the community. A symbol of respect, dedication, of overcoming the odds for all of us.

Do you think its hard to earn a living to support yourself and your family through Jiu-Jitsu?
A little. If your don’t have determination and focus for what you want you won’t be able to get it.

Can you describe how it felt to receive you black belt?
Man, it was was surprise that I wasn’t expecting. I thought maybe at the end of the year. But it was very gratifying receiving my black belt from Mestre Terere. I was very happy and gratified. I was shaking and my hands were sweaty. It was a very gratifying surprise.

Now that you have your black belt, how do you think this will change your Jiu-Jitsu?
I think it will be harder now. It will be a new stage. I’ll be there with guys that have more experience. But I plan on winning.

So you spoke about the new stage in respects of competition but what about as an instructor. What are your plans as a professor?
To make champions like Fernando did. To be a champion in life. I already am. And always show dedication and merit.

As a teacher to the kids of Cantagalo what lessons and advice do you try to pass to your students?
I try to teach them what Terere and Leo always taught me. To stay away from drugs and other bad things. To study, to work, have a family. Be a champion and to focus everything on Jiu-Jitsu.

How important is it to the kids of Cantagalo to have this project?
It's important because instead of them playing as drug dealers and traffickers in the favela they come here and play and train Jiu-Jitsu. They learn to respect their parents and that’s why it's good to have Jiu-Jitsu here in the community.

Any final words?
My name is Fabricio Tavares da Silva da Conceicao, I’m 30 years old and I have an important role here. I teach the morning classes and the kids class. I teach at night alongside Mestre Terere and I’m an example for a lot of kids here. Oss 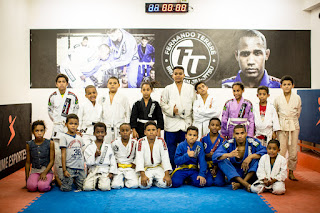