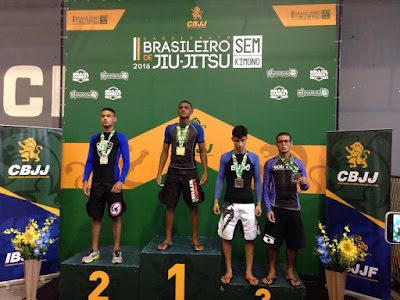 Gabriel (Far Right on the Podium)

Young athlete Gabriel Areas stepped out onto mats at the world renounced Tijuca Tennis Clube over the weekend to compete in Brazil’s most prestigious no-gi tournament the Brasileiros sem-kimono (NoGi).

He had five hard-fought matches between his weight division and the absolute, taking the bronze in the former and the silver in the latter.

In the first match in his weight division, he showed why he had earned the nickname Godzilla – racking up a seven-point lead before taking his opponents back and finishing with a rear naked choke. 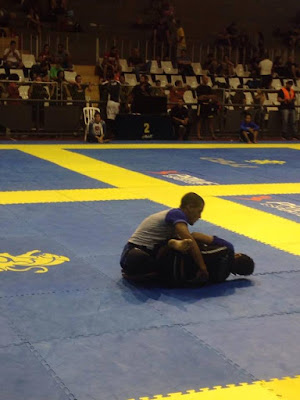 His semi-final match saw him four points ahead having taken the back of a very tough opponent, with twenty seconds remaining, out of nowhere his opponent scrambled back to guard and threw up a triangle, Gabriel was forced to concede.

However, the sting of this loss was quickly avenged. Returning in the afternoon for the absolute division, the first round saw the pair matched up again. In a back and forth battle, Gabriel fought his way to his opponent’s back, this time there would be no mistake and he was able to finish with a rear naked choke.

A semi-final clash that was more of a wrestling match than a jiu-jitsu contest. Whilst most jiu-jitsu matches that don’t reach the ground tend to be dull affairs, this was anything but. Both competitors were ferocious in their takedown attempts – there were big double legs, single legs and hip throws – each time the respective athlete was able to scramble back to their feet or they ended up out of bounds. Equal on advantages the match could have gone either way – but Gabriel was given the nod by the referee. 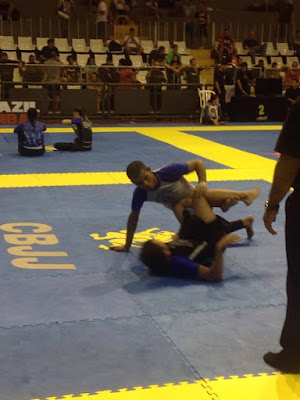 The final saw him matched with a very good guard player. Although the contest itself was somewhat of a frustrating affair, as they became entangled in 50/50 very early on and traded sweep points back and forth, with Gabriel, unfortunately, losing out 8-6.

All-in-all this was an excellent day for young Godzilla, he had demonstrated the versatility of his game, between passing, guard work, wrestling and an ability to finish tough opponents. When asked how he felt about his performance, he explained:

“I am happy, but I am ready for gold next time” 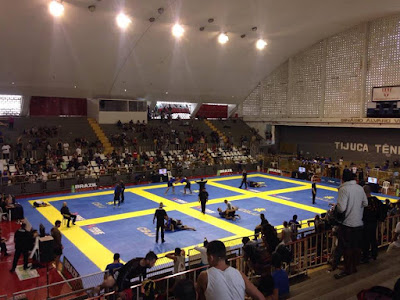 The historic Tijuca Tennis Club where IBJJF Worlds
Used to be held
No comments: 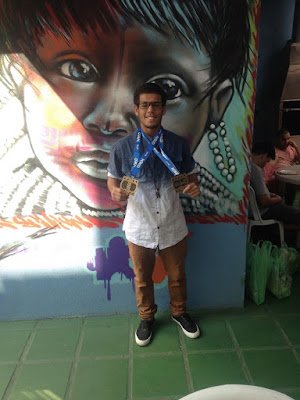 Young athlete, Gabriel ‘Godzilla’ Areas recently took a trip to Sao Paulo to complete at the IBJJF Sao Paulo Open, one of the premier tournaments of the year’s Jiu-Jitsu calendar in Brazil. This year’s edition was no exception, it was huge, seeing over 1,600 athletes competing over two days with twelve mats running simultaneously. 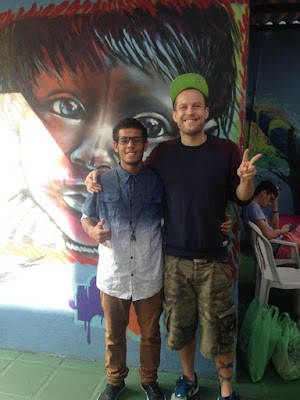 There was some excellent jiu-jitsu on display, in particular, the ferocity of the young competitors was mind-blowing. There appeared to be a renewed emphasis on passing the guard for the lower belts, who could be seen forcing their way through the complex guard-play of their opponents. All this was done at a hundred miles an hour!

The double guard pull which had become synonymous with the lower weight divisions in the last few years was not nearly as prevalent – it would appear that the IBJJF implemented rule change has made an impact.

Gabriel competed in both the Gi and No-Gi divisions in the blue belt juvenile category. 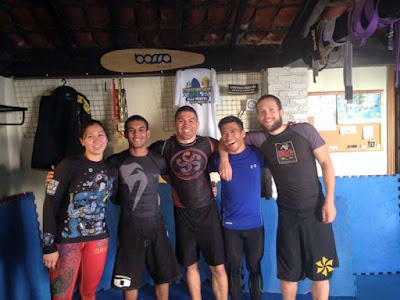 Training a little NoGi at the Connection Rio Hostel

Unfortunately, his first match was 2-0 loss to an excellent guard player. An initial mistake in his aggressive attempts to pass the guard resulted in being lured into a triangle. Although being stuck in a choke that would have put an ox to sleep, really epitomized the Gabriels’s never say die attitude. 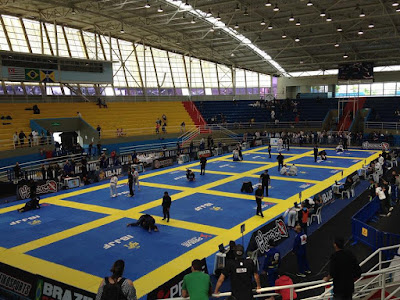 When questioned on how close the submission was, he explained that he never thought of giving up as there is always a chance of escape. In response to what he would do differently next time:

“I will prepare a little more and improve my strong positions and learn some more, I want to always have an ace up my sleeve”. 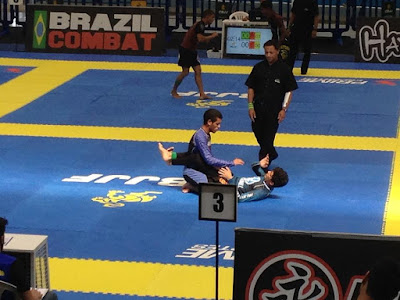 Returning to the mats the following day for the No-Gi, he was able to come away with a bronze medal in his weight division. After being stuck in another sticky situation with a belly down foot-lock that popped his foot, again he was unwilling to concede and battled it out managing to escape.

He wasn’t the only competitor who suffered a similar fate that weekend, the rise of the foot-lock continued and a number of competitors could be seen hobbling around after their matches. 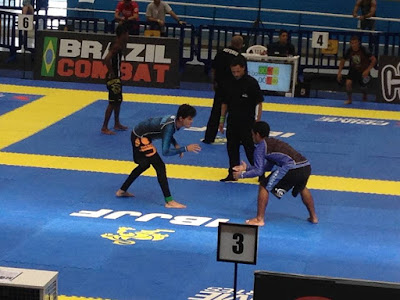 Gabriel himself mummified his foot and then struggled back out onto the mats for the open weight division. An inspired performance on one leg resulted in a points win against the champion from the featherweight division, this led to a place in the semi-finals.

In the semis, guard work was the key again and his opponent swept him three times for a 6-2 victory. For his efforts, Gabriel received a swollen nose and lip after being caught with a thunderous knee to the face to go along with his barely functioning foot. 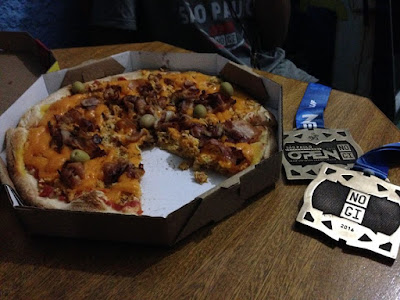 Moz is kind of known for getting it in with the junk food after
competitions. Apparently, he is passing this tradition on to Gabriel!

Nevertheless, two IBJJF bronze medals in his first competition outside of Rio was not a bad haul.

When questioned on what he enjoyed most about the weekend, he explained that he loves to travel and enjoyed visiting Sao Paulo even though it is very cold. But the absolute best thing was the huge pizza after the competition! 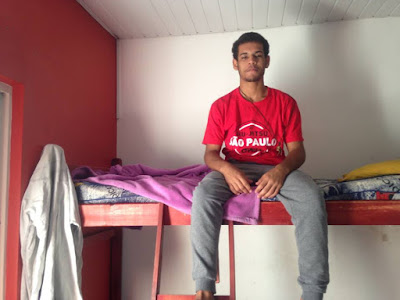